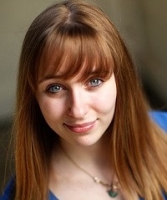 Eve is ecstatic to make her debut with Crane River Theater in the production of Boeing Boeing. She is currently studying history and theater at Doane College where she performed as Gabriella in the Fall of 2012. Eve was born and raised in Russia where she began to act at the age of five. After moving to the United States she continued exploring her passion for theater all throughout high school and now college. Her past roles include Elmire in Tartuffe, Jaquenetta from Love’s Labour’s Lost, among various other supporting roles. She would like to give a warm thanks to Steve Barth and Becky Boesen for giving her this opportunity to join the cast of her all-time favorite farce-comedy.