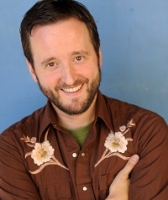 Tim got his BA in Theatre Arts from Whitworth University in Spokane, WA and his MFA in Acting from the University of Nebraska-Lincoln.    He has performed in theatres all over the country, including the Nebraska Rep, Seattle Shakespeare Company, Colorado Shakespeare Festival, and Garry Marshall’s Falcon Theatre Company in Los Angeles.  Tim’s television credits include Parks and Recreation, iCarly, and Days of our Lives and can be seen in many commercials for products like Honda, Esurance, and Budweiser.  He is very excited to be working at Crane River with his dear friend Steve Barth and his beautiful girlfriend Alexandra.