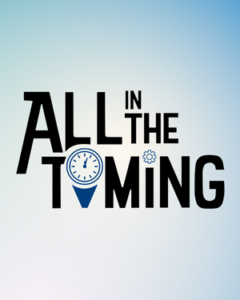 “All in the Timing is by a master of fun. David Ives spins hilarity out of words.”

“Theatre that aerobicizes the brain and tickles the heart.”

All in the Timing

Laugh until it hurts with this comedy filled with wit, intellect, and just plain fun! All in the Timing is a collection of comedies that will have you laughing out loud! In ‘Sure Thing’, a couple on a first date has the opportunity to reset and try again each time they say the wrong thing. ‘Words, Words, Words’ explores the idea that given enough time, three monkeys in a room could eventually compose any given text, including Shakespeare’s “Hamlet”. In ‘The Universal Language’, a shy young woman places her faith in a language tutor, and their lesson sends them off into a dazzling display of hysterical verbal pyrotechnics – and, of course, true love. Finally, in ‘The Philadelphia’, a man discovers that he’s entered a strange pocket of the universe where the only way to get what he wants is to ask for the opposite. Presented at the World Theatre, it’s a show filled with quick banter, hilarious scenarios, and plenty of laughter!