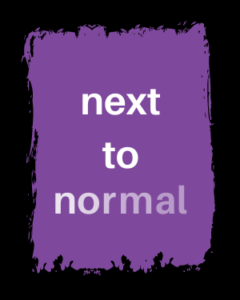 “No show on Broadway right now makes as direct a grab for the heart or wrings it as thoroughly as Next to Normal does… brave, breathtaking… a work of muscular grace and power.”

“…heart-melting… sensitively crafted show… something inordinately powerful in the music and the story, which have been meticulously woven together by the songwriting team of Tom Kitt and Brian Yorkey… beautiful songs that get to the heart of this deceptively complex story – and simply get to the heart.”

“An honest, truthful story about a family with problems but a whole lot of love for each other & beautiful, artful, deeply moving.”

This deeply moving and captivating musical took Broadway by storm in 2009, winning three Tony Awards and the Pulitzer Prize for Drama. On the outside, The Goodmans seem like the average American family: house in the suburbs, white picket fence, and two sharp-witted kids. But inside, their lives are anything but normal, with long-buried secrets that threaten to tear them apart. Diana Goodman has suffered from bipolar disorder and hallucinations for sixteen years. Now, trying to balance sanity, happiness, and her commitments to her family, her disorder takes a turn for the worst and her husband, doctor, daughter, and son each try to help her through the struggle in their own way. Featuring powerful lyrics and an electrifying score, this explosive musical uses wry humor and brutal honesty to explore how family trauma can fracture the American Dream, while ultimately leading to a chance at new beginnings. See why critics around the country have called Next to Normal “one of the most powerful nights of theater you will ever experience”.