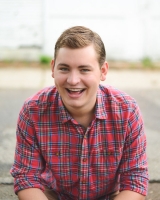 Ben is a student currently enrolled at Minnesota State University, Mankato and is working towards his Bachelor of Fine Arts degree in Acting. A few favorite roles have been “Thénardier” in Les Misérables, “Robert” in Betrayal, “Jaques” in As You Like It and “Clown” in The 39 Steps.  Some of his hobbies include attempting to cook, attempting to ski, and attempting to read more books. Ben is thrilled and delighted to work with Crane River Theater Company this summer and to be given the opportunity to play a dream role of his, “Lord Farquaad”!