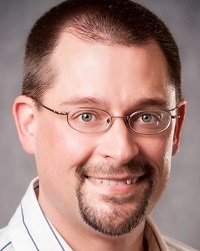 Michael joined the faculty at the University of Nebraska-Kearney as the Light Design and Stage Management Lecturer in the fall of 2013. A North Carolina native, he attended UNC-Asheville for his undergraduate degree and received his MFA from the University of Memphis. He spent several years in Memphis as a freelance designer and stage manager before he returned to North Carolina. He served on the faculty for Western Carolina University teaching lighting, stage management, and sound for eight years while also serving as the Technical Director for the John W. Bardo Performing Arts Center. Among Michael’s favorite designs are The Consul (UM –Opera), Something Wicked This Way Comes (UM), Sideman (Playhouse on the Square), RENT (WCU), and The Drowsy Chaperone (WCU). He is excited to join the Crane River Theater design team once again after serving as the Light Designer for Footloose last summer.